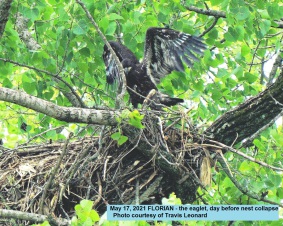 There was a partial collapse of the eagle nest.

(see before and after pictures below)

People gathered on Wednesday hoping the eaglet had survived.  A wildlife officer from Ohio DNR investigated; but could find no evidence of survival.

So it is with great sadness,  that we must announce the passing of FLORIAN. 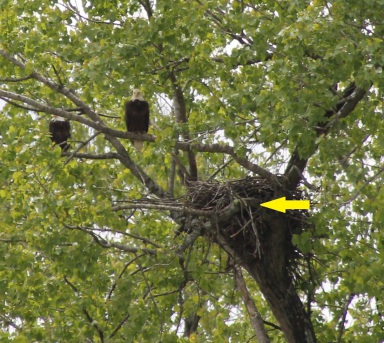 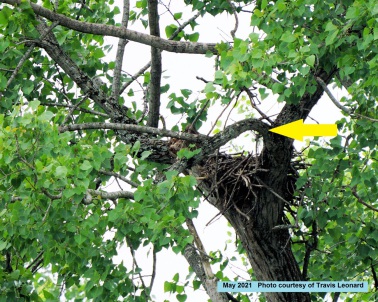 Note the large hooked branch that was near bottom of nest; but after collapse, the branch is located way above what is left of the nest. 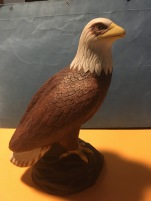 After maturing at about nine weeks, the eaglet will remain in this nest until they leave at about 10-to-12-weeks-old…sometime near the end of May. But before he/she leaves the nest, we need to name them.

The CHS Board of Directors selected the winning name at their meeting on May 4th. Person who submitted willing name, will receive an eagle statue and have a  commemorative plaque placed in Toll House at Heritage Park.

The following names were also submitted: 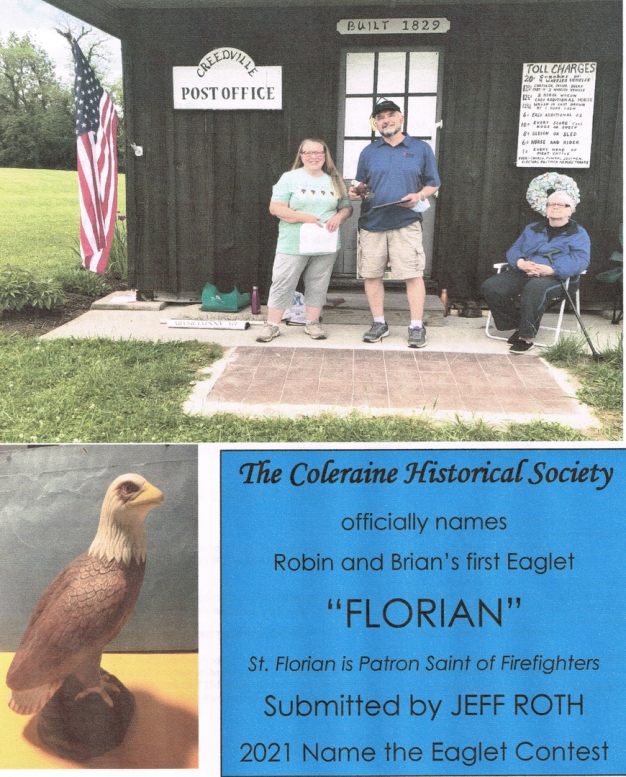 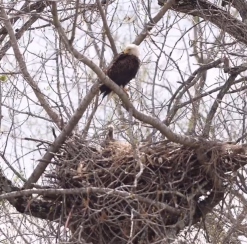 Our first picture of

must be so proud.

Colerain Eagle Watchers are eagerly watching to see if there could be more than one baby eagle.

Anyone capturing a picture of new arrival; please share with CHS.

Once we confirm if 1 or 2 babies, CHS will have a Contest to Name the eaglet. Start thinking now!

NOTE: will need to be gender neutral name since we won't know if eaglet is Male or Female for couple of years.

When will the babies arrive?

Eagles Brian & Robin have been seen in the nest continuously, which leads to speculation that they are incubating an egg (or two).

Bald eagles incubate their eggs for about 35 days. They begin incubation as soon as the first egg is laid. The second egg usually appears within 36 to 72 hours after the first.

Incubating eagles will sit on the nest almost continuously. ... During nest exchange adults may both be in nest or sometimes one adult may leave eggs unattended for a few minutes before the other adult arrives and resumes incubation.

Eagle eggs begin hatching roughly 35 to 37 days after they are laid. This will begin in late March if the eagles lay eggs in mid-February. Hatch can take more than 24 hours for any given egg.

After maturing at about nine weeks, the eaglets will remain in this nest until they leave at about 10-to-12-weeks-old.

Anyone capturing eagle pictures and would be willing to share, please forward to: colerainehistorical@outlook.com

For more information on Bald Eagles check out: https://www.baldeagleinfo.com/eagle/eagle4.html

On October 29, 2020 The Coleraine Historical Society (CHS) designated this pair of Bald Eagles as Honorary Members…

CHS selected the names “Robin and Brian” in memory of the 2 fallen firefighters out of Dunlap Station Firehouse. It seemed only fitting as Heritage Park is the location of Dunlap’s Station/Ft. Coleraine.

Ok, so the nest is technically located in Crosby Township across the  Great Miami River; but the best viewing of the nest is from Heritage Park.

It is widely believed that the juvenile bald eagle that has been hunting and living around Heritage Park for the last 4 years (2015-2019) has finally found a mate and nested. Eagles mate for life, unless one partner dies early. Year after year most return to the same nests. So we can look forward to this pair hunting and fishing in the Great Miami River. 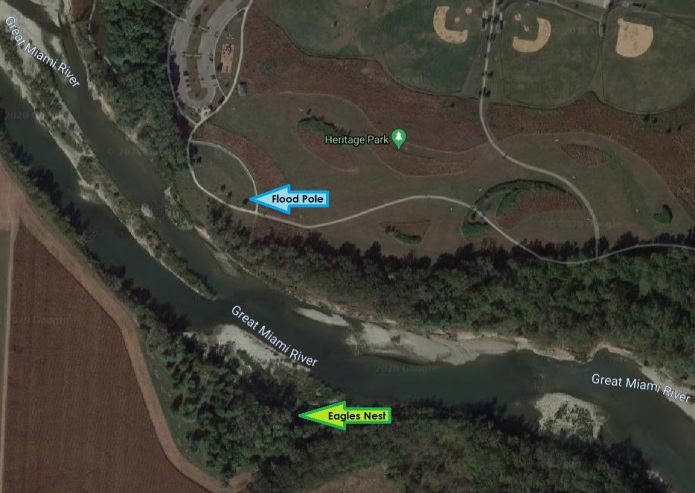 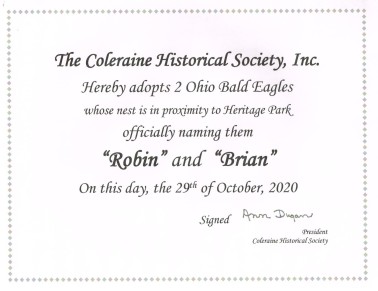 The following is from the adoption ceremony…

Bald eagles were removed from the federal threatened and endangered species list in 2007 and from Ohio's list in 2012.    They are, however, still protected under several federal laws.

ODNR (Ohio Department of Natural Resources) divides Ohio into five regions with Southwest Ohio encompassing the southwestern and western parts of the state. This region had the greatest increase in sightings going from 9 nests in 2012 to 74 nests in 2020. In 2012, Hamilton County had only 1 nest…now we have 3.

Eagles prefer to nest near waterways. It is widely believed that the juvenile bald eagle that has been hunting and living around Heritage Park for the last 4 years has finally found a mate and nested. Eagles mate for life, unless one partner dies early. Year after year most return to the same nests. So we can look forward to this pair hunting and fishing in the Great Miami River.

Several pairs of names were suggested; but once we heard “Robin & Brian” the decision was easy. Captain Robin Broxterman and Firefighter Brian Schira died fighting a house fire on April 4, 2008 not far from Heritage Park.

Today, the Coleraine Historical Society will be symbolically adopting the        2 nesting Bald Eagles and officially naming them “Robin & Brian”.

What better way to honor the memory of the 2 firefighters out of Dunlap Station Fire House, than to name the eagles after them; and we can watch them fly high over Heritage Park, the location of the original Dunlap’s Station. 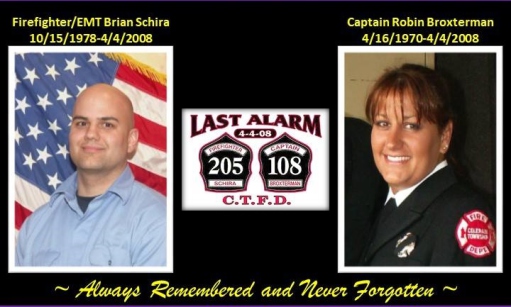 Below are Pictures of eagles Robin & Brian

THANKS to all the photographers who have shared their pictures.

If YOU have pictures to share, please email copies to colerainehistorical@outlook.com 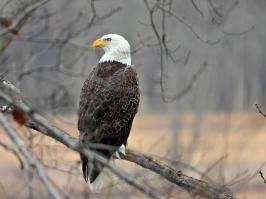 Bald eagles were removed from the federal threatened and endangered species list in 2007 and from Ohio's list in 2012. They are, however, still protected under several federal laws.

According to the 2020 nest census from the Department of Natural Resources (ODNR) Division of Wildlife, Ohio’s bald eagle population is exploding.

ODNR divides Ohio into five regions with Southwest Ohio encompassing the southwestern and western parts of the state. This region had the greatest increase in sightings going from 9 nests in 2012 to 74 nests in 2020.

Eagles prefer to nest near waterways. In Southwest Ohio, the Ohio River is here but there's also some smaller rivers such as the Great Miami River and the Little Miami River and some great reservoirs, too, such as Caesar Creek and East Fork Lake.

Here's a breakdown of the nest count in Southwest Ohio (as defined by ODNR). 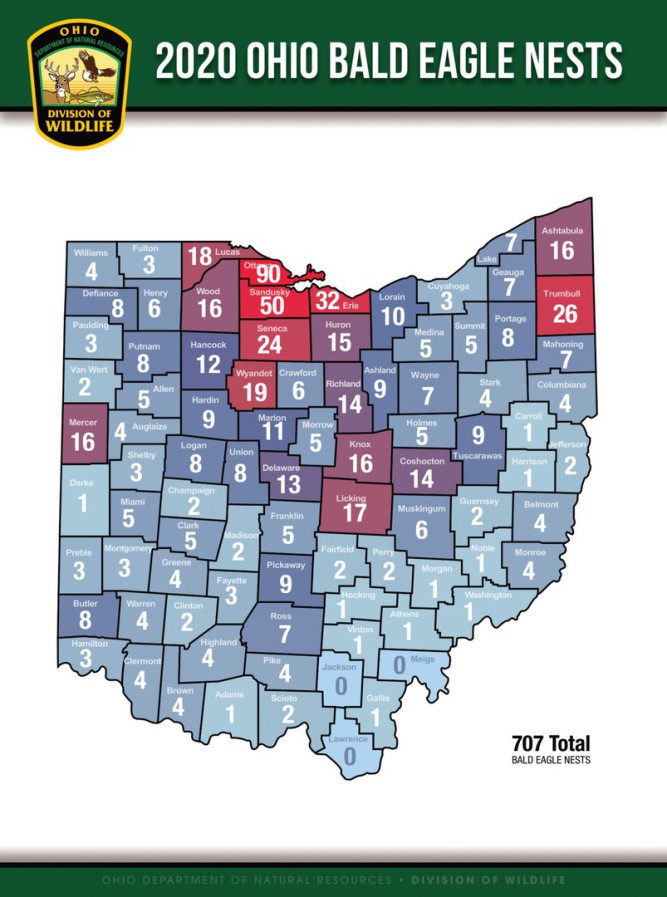 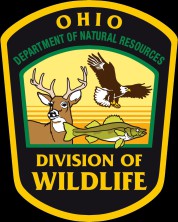 The ODNR website provides the following info on bald eagles

Our national symbol, the bald eagle (haliaeetus leucocephalus) displays many outstanding characteristics - exceptional vision, a striking appearance, and a commanding presence. Sadly, by the latter half of the 20th century, the bald eagle was classified as an endangered species. Through the diligent efforts of wildlife biologists and a concerned public, the bald eagle population is coming back and is no longer on the federal endangered species list. Its federal and state status is now delisted but it is still in a federal monitoring stage for five years.

The adult bald eagle is one of the most easily recognized species of wildlife. It has snow white feathers covering its head down to the neck area. The tail feathers of the mature bald eagle are also white. The body color is very dark brown, almost black. Yellow eyes, beak, and feet accent the bird’s appearance. The white of the head and tail distinguish the fully mature eagle from immature birds of the species. Young eagles do not have this appearance until they reach the age of five or six years. Until that time, they are decidedly duller in appearance and, to the inexperienced observer, probably would not be recognized as a bald eagle. Immature eagles are almost uniformly dark brown from head to tail feather. Their undersides are mottled white with buff and cream blotches.

Pair bonding activity for both new and established pairs begins in the fall. Courtship behavior and nest building can occur anytime between October and early December. The female lays one to three eggs in mid-February to late March. Both she and her mate spend time on the nest incubating and share the feeding responsibilities.The 1-3 eggs usually incubate for 35 days, from February through April. The young are altricial (helpless and dependent on parents) and usually leave the nest after 10-13 weeks. A female will produce 1 brood each year, but if a nest is destroyed, some pairs will "recycle" and initiate a second nest within the same year. Eagles have continued to recover from a low of 4 breeding pairs in 1979. In 2018, the number of estimated breeding pairs increased to 286, and pairs produced an estimated total of 445 young.

The bald eagle can be found in small concentrations throughout the U.S., particularly near sizable bodies of water, natural and man-made. In Ohio, the bald eagle’s stronghold is the marsh region of western Lake Erie. For the bald eagle, the ideal site is one where water with ample food (fish) is located within two miles of the nest. The eagle shows a preference for a somewhat secluded homesite. This is particularly critical when the nest is being established and young raised. Eagles are highly territorial and too much interference from other eagles can result in problems at the nest site.

Adults are, in general, year-round residents. Immature birds, however, sometimes migrate during spring and fall. There is a major wintering area in Tennessee, and it is possible that was where they winter. Usually around March, they return to Ohio.