Saturday, May 7 at Noon

16 Bricks to be installed

The CHS Memorial Walkway Project was conceived as a way to honor Coleraine Historical Society Members who have passed; but who, during their lifetime, worked to preserve Township History for future generations.

Inscribed memorial bricks will be placed in a pathway from the Toll House to the Dunlap Station Outline in Heritage Park. After all, Dunlap Station is where our story began.

Currently, the Society will purchase a Brick to remember a CHS member who passes while active in the Society. But many before have made significant contributions since the Society was founded in 1964, to preserving Township History.

If you would like to purchase a brick or contribute so that           we may honor those who have passed, please:

OR email for PayPal invoice  colerainehistorical@outlook.com

New Bricks to be added to Walkway each May 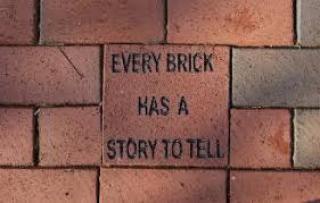 The Memorial Brick Walkway had the first 50 Bricks installed

THANKS to the labor provided by Larry Shad, Raj Rajagopal,

And a SPECIAL THANKS to Betty Sandoz for Water, Chick-fil-A lunch and Cookies. 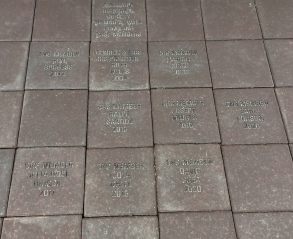 The following is from the Dedication ceremony...

Founded in 1964, the Coleraine Historical Society’s mission is to help people connect with Colerain Township's past in order to understand the present and create a better future.

Over the past 54 years, Society members have worked tirelessly to acquire and preserve historical knowledge, materials and artifacts of Colerain Township, OH. They have helped people research family history, preserved Township cemeteries, rescued abandoned historic buildings, and restored objects of historic interest such as the Giles-Richards Watering Trough.

The Memorial Walkway Project was conceived as a way to honor Coleraine Historical Society Members who have passed; but who, during their lifetime, worked to preserve Township History for future generations.

Inscribed memorial bricks will be placed in a pathway from the Toll House to the Dunlap Station Outline in Heritage Park. After all, Dunlap Station is where our story began.

Current plans are for the Society to purchase a Brick to honor a Society member who passes while active in the Society. But many more CHS members, who are no longer with us, have served the community and made significant contributions to preserving Colerain Township History. Through future fundraising efforts and donations, we hope to honor their memory.

Passed away March 2, 2004 at the age of 96. There just is not enough time at this Dedication to list her accomplishments or the impact she had on Colerain Township and College Hill History preservation.

Ruth Wells was Founder and first President of The Coleraine Historical Society.

Passed away in 2011. She was a member for many years of CHS. Julia’s son Denny is a current member of CHS.

Ron generously donated $10,000 to CHS which helped to create and sustain our Museum.

He was an active member of CHS for many years. Ralph’s wife Betty continues his legacy of preserving history and actively supporting CHS.

Passed away in 2019. While she wasn’t a member for long, her impact still remains. Izola taught the CHS members PowerPoint…meetings and programs look very different thanks to Izola White.

Marian loved local history and worked tirelessly for many years with CHS as both an officer and committee member. Highlighting just a positions include:

Passed away on August 27, 2020 at the age of 83. Earl was a walking encyclopedia of history. He served for many years as President of Crosby Township Historical Society. And in 2018 Earl and Larry Shad had an adventure driving the 557 mile Ohio John Hunt Morgan Heritage Trail. 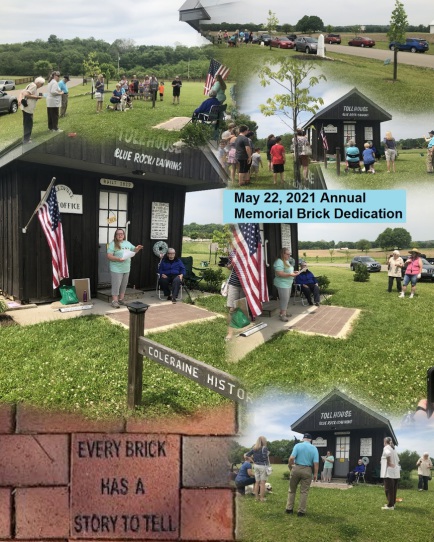 we are placing 24 new

bricks in the pathway.

One of the Founders of CHS, MARTIN FREY passed away in 1980 at the age of 79. A lifelong resident of Groesbeck, FREY was owner and operator of Martin Frey Contractors.

One of the Founders of CHS, Passed away in 1988. He was a member for many years of CHS.

One of the Founders of CHS, JOSEPH PETER KRAUSHAR passed away in 2004 in Tucson, AZ at the age of 88. Born in Cincinnati in 1915, he served in the Army during WWII. Less than a year after founding CHS, Peter and his wife moved to the Arizona desert due to Peter’s lung condition. One of Peter’s claims of fame, was that he had visited every continent except Antarctica.

14 Other Members, we are recognizing today are:

Passed away in 1979 at the age of 82. He was a retired engineer from Powell Valve Company. He served in Marine Corps during WWI. In addition to being a member of CHS and the Cincinnati Historical Society Moore was a member of the Sons of American Revolution, Sons of the Union Veterans of Civil War, Hugenot Society of Ohio and American Legion. Moore left behind, 1 son CHS Member Willard Austin Moore and 4 daughters; 20 grandchildren (including 2021 Pageant Editor Tere Moore) and 8 great-grandchildren.

Passed away in 2008 at the age of 61. An avid genealogist, Bailey could trace his family tree back to Charlemagne. With fellow CHS Member Linda Ebersole, in 1994 Bailey mapped and recorded all gravestones in Township Cemeteries which they published in the book “Gravestone Inscriptions and Cemetery Records of Colerain Township 1794-1994”.

Passed away in 2009 at the age of 79. After retiring from Cincinnati Water Works, Mike became a Practical Nurse. He was an Air Force veteran of Korea and served as a Red Cross volunteer for over 20 years. From 1992 to 2008, he was President of CHS.

Passed away in 2013 at the age of 89. Marian was a Life Member of the Girl Scouts, and member of the Eastern Star. A devoted Reds fan, Marian also enjoyed square dancing with the Hayloft Barn-Grand Squares Club. Marian’s daughter JoAnn (Trader) Bertram currently serves as CHS Vice President (2021).

ELODIE CLARE WEINSHENKER passed away in 2013 at the age of 83. Born in Hamilton, Bermuda, Clare graduated from the University of Edinburgh, Scotland. She led a life of service to her family, friends and community and worked at many volunteer organizations.

Passed away in 2013 at the age of 97. Norm and his wife Louise were married for 72 years. He retired from Procter and Gamble. Bob was brother to CHS Members Norman Muehlenhard and Florence Goetz.

DONALD MARK WILLOUGHBY passed away in 2014 at the age of 54. Mark served as CHS Fundraising Trustee for 2 years 2013-2014. Mark was a CHS Member for a short time but left a great void. He created the CHS Facebook page with the popular “What’s It Wednesday” picture contest. With his brother-in-law Rob Sizemore, Mark fulfilled a lifelong quest to find the remains of the sunken Civil War ship, The Sultana. His find lead to a PBS special, which aired shortly before his death.

Passed away in 2015 at the age of 96. Norm and his wife Eileen were married for 70 years. He was a WWII veteran who served in the US Army. He retired from Procter and Gamble. A lifelong resident of Colerain Township, Norm was active in politics and served as a Township Trustee from 1959 through 1977. Norm was brother to CHS Members Robert Muehlenhard and Florence Goetz.

A casualty of the COVID pandemic, John passed away on January 19, 2021 at the age of 70. He enjoyed activities such as square dancing, carpentry and was a jack of all trades. John and Linda were married for 47 years.

On March 25, 2021 LINDA RUEDENAUER EBERSOLE passed just 65 days after she lost her husband John to COVID-19. She and John were married for 47 years.

Linda held several CHS offices, was a valuable genealogy resource and worked on numerous committees. Two of Linda’s most notable contributions were the generous donation of the wood cabinet/base for the Dunlap Station Model and in 1994, with CHS Member Bailey Rogers, mapped and recorded all gravestones in Township Cemeteries which they published in the book “Gravestone Inscriptions and Cemetery Records of Colerain Township 1794-1994”.

And just recently, we lost our eldest member,

Florence Muehlenhard Goetz passed away on Friday, May 7, 2021 at the age of 97. Florence had been a member of the Coleraine Historical Society since she and her husband Herbert joined in 1985. Herbert Goetz passed away in 2003.

Florence was born in Colerain Township and lived here until recently. Her parents were William and Ida Zoellner Muehlenhard. She lived with her sister, Esther, and brothers Herbert, Robert, Norman and William on the family farm. Three generations of the Muehlenhard family lived on and worked the farm from 1885 till 1954 when the property on Pippin Road was sold and became the subdivision Northbrook.

The land was part of the Symmes Purchase. In 1792, the land was purchased by John Symmes from the U.S. Government. In 1862, the farm was purchased by Joseph Stout, Jr. The Stout family name is familiar in Colerain Township history. Herman Muehlenhard bought the property from the Stout family in 1885, and from 1910-1922 leased it to his son, William H. Muehlenhard. William bought it in 1922 and sold it in 1954.

Florence and her family have a wonderful history from their ancestors to pass on. Along with Florence and Herbert, two of her brothers, Robert, William and Norman, were also members of the Coleraine Historical Society. Herb served as Secretary from 1988-1995. Both Herb and Florence volunteered for many committees and worked on society activities as well. In addition, Florence participated on the 1994 Bicentennial Committee.

Florence was a stay-at-home mom to her daughters, Connie, Debbie, Cindy and Beverly.

She was a dedicated volunteer over the years. She served as a room mother and was active in PTA, along with Herb. She was a Camp Fire Girl leader and taught Sunday School when her children were small. Herb and Florence also directed Church family camps. Florence was a volunteer at Providence Hospital and just recently retired from her volunteer work at the YMCA. She worked on a project for Matthew 25 by cutting plastic bags that are made into sleeping mats for people in depressed areas of the world.

And, of course, her volunteer spirit was much appreciated by the Coleraine Historical Society.

She had a quiet manner about her; but she could be depended upon to show up and roll up her sleeves. We will miss that smile…