For article on HISTORY OF DUNLAP'S STATION, scroll to bottom of page 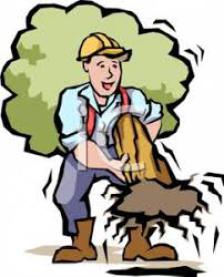 Sadly even with the abundance of Rain we have received in May-June, a couple of the Paw-Paw trees have not thrived.

White Oak Gardens is removing the trees and will provide replacements in September.

The holes were dug by equipment; but volunteers were needed 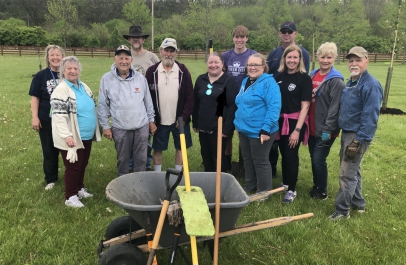 Cindy Abrams and her son Nolan

SPECIAL THANKS to Dr. Jim Muth for use of excavation equipment

5 Trees were planted in October 2021 to bring the total to 10 trees in the Dunlap Station Outline Project. The completed design has 24 trees.

will be purchased in Spring 2022 and (hopefully) planted in time for our annual dedication ceremony on May 7, 2022.

Longtime CHS Member, Dee Bardes is administrator of the fund which was created in memory of her Mother Priscillia Haffner.

CHS is very thankful that due to receiving this grant, our project will now be able to be completed far sooner than we had planned.

Thank you, Dee, for your support and generosity towards this project. 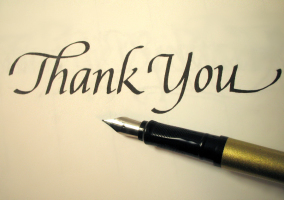 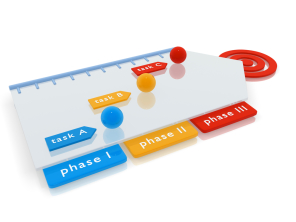 Dunlap's Station, later referred to as Fort Colerain was on the east bank

of the Great Miami River, and was established in early 1790.

A marker placed by Boy Scouts in 1960s mistakenly referred to the area as to "Ft. Dunlap". 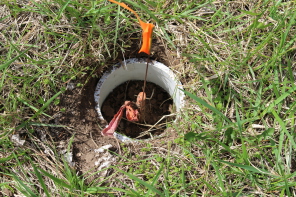 To place surveyor 43 iron pins on the outline of Dunlap's Station. Then encase each pin with a PVC collar and fill with concrete. 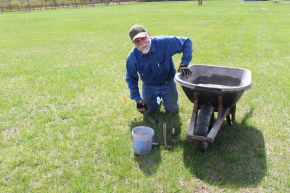 Thanks to Surveyor LARRY SHAD for marking the pins.

Thanks to GARY HENSON for installing PVC collars and concrete. 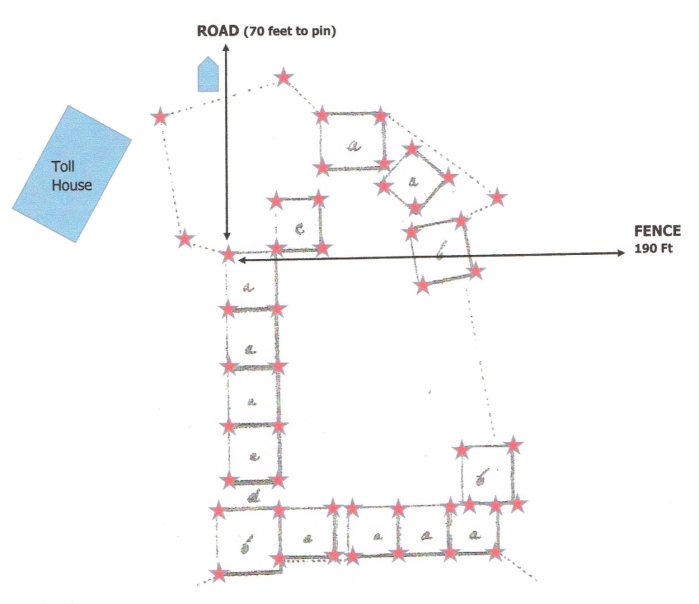 To facilitate and coordinate the outlining of the Dunlap Station “Footprint” native Trees.

This Project to be completed solely through donations.

With help of White Oak Garden Center, a detailed plan for planting 24 Native Trees has been developed. As monies are donated to the project, trees will be planted. 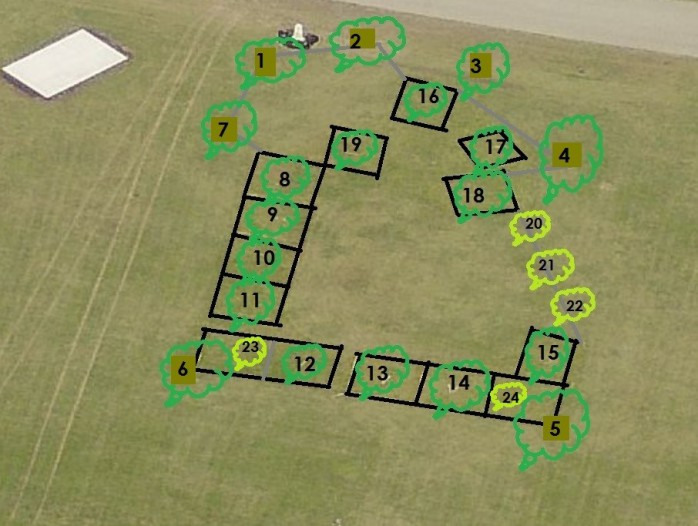 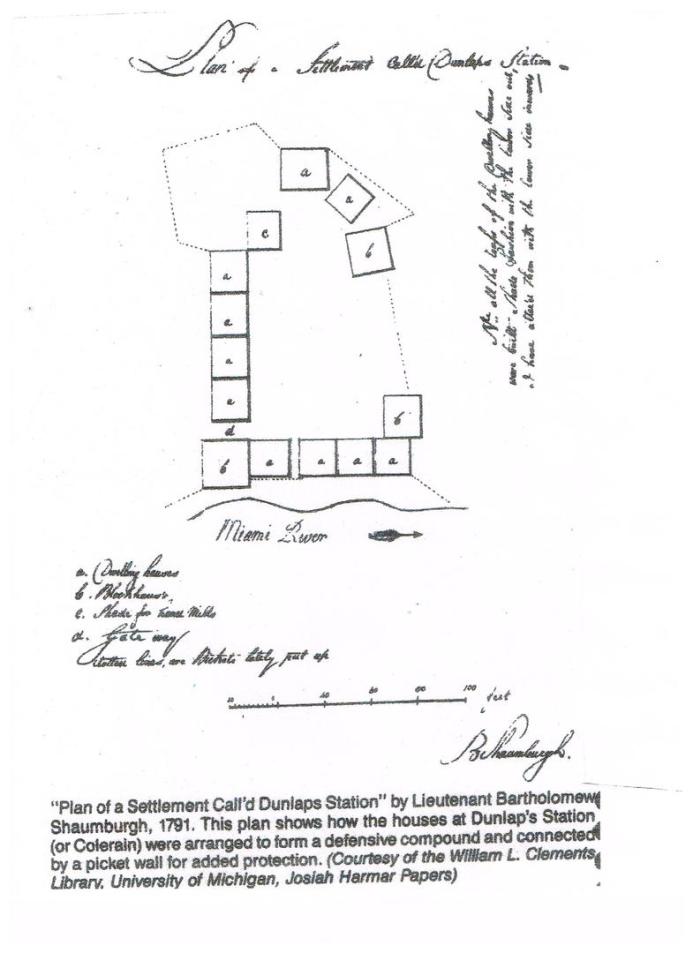 c. Shade for hona mills (our best guess is the writer meant "animals" 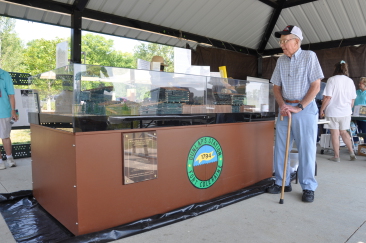 On permanent display in the Rotunda of

the scale model of

was built by member

The Coleraine Historical Society considers the Muehlenhard Model to be the single most important visual piece in our collection that serves to preserve and share history with the Township residents. 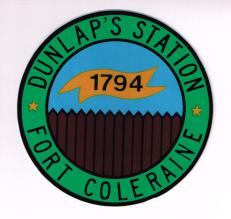 On August 24, 1749 French explorers buried a lead tablet at where the Great Miami River joined the Ohio River; thus proclaiming the land for France. For the next 100 years, that lead tablet would be used for surveying purposes. The French later sold the land to the United States as part of the Louisiana Purchase.

October 1785, The United States sends General George R. Clark to the area and he establishes Ft. Finney near the mouth of the Great Miami River.

January 1786, the Shawnee Tribes give up control of the lands east of the Great Miami River by signing the Fort Finney Treaty with General Clark.

In 1787, The United States Congress created the Northwest Territory which included Ohio, Indiana, Illinois, Michigan, Wisconsin and a section of Minnesota. The land was described as being “West of the Allegheny River, North of the Ohio River, and East of The Mississippi River”.

Benjamin Stites was visiting in what is now Maysville Kentucky when Indians stole some of his horses.  As he pursued them through the wilderness in Ohio, he was so impressed with the fertility and beauty of the country that he told his friend, Judge John Cleves Symmes, of its possibilities.

In 1792, Judge John Cleves Symmes formed a syndicate, the Miami Company, and convinced the Congress to allow him to purchase a large tract of land between the Great Miami and Little Miami Rivers known as the Symmes Purchase or Miami Purchase. Symmes with the first group of settlers founded the town of North Bend. From there he enlisted the services of a friend, John Dunlap. Dunlap was a Surveyor and Symmes needed his land plotted and boundaries marked so he could sell off parcels of the territory to arriving settlers.

After surveying and plotting the land, in 1790, John Dunlap ventured up the Great Miami River to a spot along the East side about seventeen miles Northwest of Ft. Washington (on Ohio River). Dunlap named the area Coleraine, because of the rolling hills and winding river that reminded him of his homeland – Coleraine, Ireland. The northern border of Coleraine was actually five sections (about 3 miles) more north than it is today. It extended into what is now Butler County.

In Coleraine, along a large bend in the Great Miami River, Dunlap and a small band of settlers started clearing an acre of land. Then they built small cabins with roofs slopping to the rear to keep rain draining away. The cabins were built in close proximity to each other. They hoped this arrangement would improve safety and protection from the Indians who roamed the area in violation of the Fort Finney Treaty with General Clark.

This band of settlers also built an eight foot high stockade wall. This wall was not very sturdy, as settlers split the logs used for posts so they could cover more length of stockade wall using fewer logs and cutting down fewer trees. They also built the stockade wall between the cabins using the back wall of each cabin as part of the stockade wall. Using the cabin walls actually weakened the security of the stockade because their sloping roofs were close enough to the ground that dogs could go to and from the stockade by jumping off these low roofs. At each end of the settlement, small block houses were built. Settlers took turns as sentries. They named this settlement Dunlap’s Station. But it is sometimes referred to as Ft. Coleraine.

By 1791 about 30 persons inhabited the small fort, including women and children. Only 10 of these were experienced with firearms, leaving the settlement highly susceptible to attack.

The Fort, or Dunlap Station, sustained a brutal attack by the Indians in 1791.            It was abandoned temporarily by the settlers, who went down river to the   settlement at North Bend.

The scale model of Dunlap Station made by a member of the Coleraine Historical Society, Robert Muehlenhard, is currently on display in the Colerain Township Administration Building Rotunda.

The Township dropped the E when using the name Colerain when it became a Township in 1794.