The History of Colerain Township 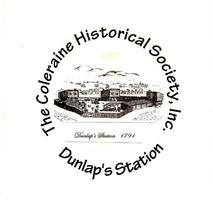 Dunlap’s Station (frontier defensive structure), later referred to as Fort Colerain, was on the east bank of the Great Miami River, and established in early 1790 in the midst of what was also called Little Turtle's War. It served three main functions:

The Northwest Territory had been established in 1787, within which Judge Symmes had organized the Miami Company and then advertised the availability of this land. They hired the Irish surveyor John Dunlap who led the party of men, women and children. Dunlap named the settlement after his birthplace of Coleraine, Ireland. It was located next to the 2,000-year-old Colerain Earthwork and one or more sacred Adena Indian Mounds.

They cleared the land, constructed the station, and grew crops outside during the first summer. The blockhouses were built as a refuge from Native attacks, since this was still primarily Shawnee land. While neighboring Indians and settlers had managed to share an earlier Christmas feast, naturally an application was made at Fort Washington for a garrison.

"...A small detachment of United States troops, under the command of Lieutenant Kingsbury, occupied the fort. It consisted of a corporal and eleven men, besides the commandant. Their names were: Taylor, Neef, O'Neal, O'Leary, Lincoln, Grant, Strong, Sowers, Murphy, Abel, McVicar and Wiseman.

Three blockhouses had been constructed for the military garrison, as had a shelter for the hand mill. The ten settler's cabins faced together, a cleared line of fire was begun by removing brush and felled trees, but this was not completed in time. Another vulnerability had been that the lower edges of the roofs were on the outside and had, for example, become a way into the Fort for their dogs. This was reversed, but there were still open spaces between some of the logs. As per Shaumburgh's Plan, all this was linked with 8' high fencing of log pickets, and then extended to the shore, the total enclosed about one acre.

Only one year after it had been settled, Dunlap’s Station was temporarily abandoned following a brutal attack it sustained by Native Americans. John Dunlap and the 11 families living at the Fort moved down river to the settlement at North Bend.

The Attack on Dunlap’s Station – In the winter of 1790-1, an attack was made, with a strong party, amounting, probably, to four or five hundred, on Dunlap’s station, at Colerain.  The block-house at that place was occupied by a small number of United States troops, commanded by Col. Kingsbury, then a subaltern in the army.  The fort was furnished with a piece of artillery, which was an object of terror to the Indians; yet that did not deter them from an attempt to effect their purpose.  The attack was violent, and for some time the station was in imminent danger.

The savages were led by the notorious Simon Girty, and outnumbered the garrison, at least, ten to one.  The works were entirely of wood, and the only obstacle between the assailants and the assailed was a picket of logs, that might have been demolished, with a loss not exceeding, probably, twenty or thirty lives.  The garrison displayed unusual gallantry – they frequently exposed their persons above the pickets, to insult and provoke the assailants; and judging from the facts reported, they conducted with as much folly as bravery.

Col. John Wallace, of Cincinnati, one of the earliest and bravest of the pioneers, and as amiable as he was brave, was in the fort when the attack was made.  Although the works were completely surrounded by the enemy, the colonel volunteered his services to go to Cincinnati for a reinforcement.  The fort stood on the east bank of the Big Miami.  Late in the night he was conveyed across the river in a canoe, and landed on the opposite shore.  Having passed down some miles below the fort, he swam the river, and directed his course for Cincinnati.  On his way down, the next day, he met a body of men from that place and from Columbia, proceeding to Colerain.  They had been informed of the attack, by persons hunting in the neighborhood, who were sufficiently near the fort to hear the firing when it began.

He joined the party, and led them to the station by the same route he had traveled from it; but before they arrived, the Indians had taken their departure.  It was afterwards ascertained that Mr. Abner Hunt, a respectable citizen of New Jersey, who was on a surveying tour in the neighborhood of Colerain, at the time of the attack, was killed before he could reach the fort.  His body was afterwards found, shockingly mangled.

The Indians tied Hunt to a sapling, within sight of the garrison, who distinctly heard his screams, and built a large fire so near as to scorch him, inflicting the most acute pain; then, as his flesh, from the action of the fire and the frequent application of live coals, became less sensible, making deep incisions in his limbs, as if to renew his sensibility of pain; answering his cries for water, to allay the extreme thirst caused by burning, by fresh tortures; and , finally, when exhausted and fainting, death seemed approaching to release the wretched prisoner, terminating his sufferings by applying flaming brands to his naked bowels.

As extracted from Henry Howe’s Historical Collections of Ohio 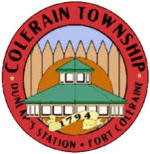 In 1794, Coleraine was established as a Township. The “e” at the end of Coleraine was dropped sometime later, Americanizing the name Colerain. The villages of Barnesburg, Bevis, Dunlap and Groesbeck were established in the early 1800′s along Blue Rock and Colerain Roads, two of the oldest roads in the area. German immigrants farmed the southwestern portion between 1840 and 1870, heavily influencing the township’s cultural and architectural traditions. 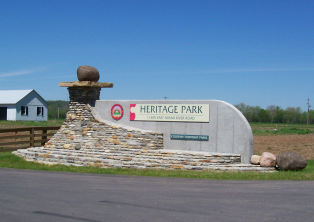 One of the biggest sources of pride for the Colerain Township Parks Division is Heritage Park.

The land has historic significance to Colerain Township as it is reported to be the site of Fort Coleraine, the scene of a fierce Indian attack on Colerain settlers in the 1790s. Today, this beautifully serene location offers residents 126 acres to play, exercise or just relax in the middle of a picturesque rural environment that is only minutes away from the hustle and bustle of Colerain Avenue. The flat topography of the Park allows for both active sport fields and passive recreational activities coexisting with the greenspace environment of the Great Miami River. Flowing along one mile of the Park property, the Great Miami River is home to an abundance of wildlife species and provides for both water recreational opportunities as well as an easily accessible ramp for the Colerain Township Fire and EMS Department on water rescue emergencies.

In addition to the canoe access ramp, Heritage Park offers 1.2 miles of paved, primarily flat walking trails with additional primitive trails winding through wooded areas of the park. Three NCAA regulation sized baseball fields (grass infields on two) are rented each spring and summer by area baseball and softball organizations. The Park’s picnic shelter can be reserved April 15-October 15 of each year and is located next to the Park’s swings and playground which will keep children occupied for hours on end!

A disc golf course offers a full 18 holes that can be enjoyed by players of all skill levels. For the serious disc golf enthusiasts, the course is great for working on accuracy. The openness allows you to observe the flight characteristics of your disc. The holes in the woods offer unique challenges and can help you work on your tight shots. There are several right-hand throws to the basket and if played correctly, the out-of-bounds areas offer good challenges.

And, you can also learn a little something while enjoying this spectacular park! In January 2017, the Creedville Toll House was moved to its permanent home at Heritage Park and after extensive restoration, was opened to the public later that year. Built in 1829, the building served a variety of uses including toll house, post office and general store through the 1800’s. Visit anytime during park hours to learn more!

In 2018, with minimal expense, one of the original 4 baseball fields was repurposed to create a 5-acre dog park for dogs and their owners to enjoy year round. With minimal expense, the fully-fenced in, space offers a double gated entrance, shaded bench seating, trees which will provide shade in the coming years, waste bags to pick up after the dogs, and water access to keep our four legged friends hydrated! Additional landscaping was completed in the spring of 2019 to improve the soil and growing conditions for grass in what had been the former clay infield area.

April 2019 has been a busy month for Heritage Park. Heritage Park has a prescribed, or controlled, burn plan that calls for burning half of the meadows and prairies located in the Park every three years. The first burn for this cycle was conducted in April 2019 and the second half will take place this fall. In Ohio, fire is often used to encourage healthy ecosystems. Fire increases soil nutrients, stimulates vegetation growth, and provides important habitat for wildlife, including shelter and food. Prescribed burns are carefully planned, watched, and tended. Trained fire managers burn selected areas to remove weedy plants that choke out native species and to reduce the leaf litter and woody debris on the forest floor, creating space for native vegetation to return.

Also in April, the longtime vision of Mr. Larry Shad, past President of the Coleraine Historical Society and retired surveyor, came to fruition with the installation of a flood pole marking how high the water levels got in two of our biggest floods in modern history – 1913 and 1959. Once labeled on the old barn of Wilhelm Farm before the Township purchased the property to develop into a park, Mr. Shad surveyed the markings and has been working for years to secure the donations to install this historical marker. An informational sign will be installed next to the pole in the coming months.